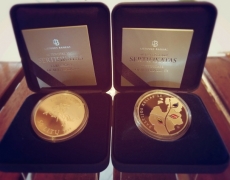 Lithuania bank released collectible (occasional) coins of 25 and 50 Lt denominations. These coins are dedicated to the 25th anniversary of Baltic Way.

The Baltic Way was a human chain that by holding hands connected the three Baltic capitals - Vilnius, Riga and Tallinn, on 23 of August in 1989. It’s purpose was to draw attention to the 50th anniversary of the Molotov-Ribbentrop Pact, which annulled the Baltic independence.

Once this event was included in the Guinness Book of World Records as the longest human chain - about 600 km.

Coins can be purchased at the box office in Vilnius, Lithuania Bank (Totorių str. 2/8 and Žirmūnų str. 151, Vilnius). It can be a great souvenir idea, since Lithuania is joining the euro zone next year.