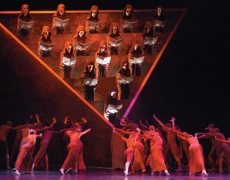 "Ecrans d’hiver" – it's a French film festival, organised by French Institute in Lithuania. "Ecrans d’hiver" will screen the newest French movies, that critics referred to as the most interesting, original, author’s cinema; films by modern French film directors.

Leo Delibes; a ballet in 3 acts.

Location of the event: Lithuanian National Opera and Ballet Theatre (A. Vienuolio St. 1)

Location of the event: Lithuanian National Opera and Ballet Theatre (A. Vienuolio St. 1)

When thinking about the most famous works for organ that have ever been composed, the top position of this list would be undoubtedly taken by the legendary Johan Sebastian Bach Toccata, Fugue d-moll and XIX c. French composer Charles-Marie Widor Toccata from Organ Symphony No. 5.

The lovers of organ music now have an opportunity to listen to the magnificent Fifth Symphony of Widor in Sts. Johns’ Church of Vilnius University. The concert will be performed by the renowned organist Jurate Landsbergyte together with her son, flutist Vytautas Oskinis.

Ticket prices: for adults 15 Lt; for pupils, students, seniors - 10 Lt. Purchase ticket at the venue (1 h prior to the event).

Plot: After two years in a psychiatric hospital, Elling comes back to his „normal“ life. Together with another former inmate, Elling gets an apartment in Oslo and he‘s expected to be able to take care of himself. For someone, who just got out of a mental institution, this new life has a lot of obstacles, that need to be overcome.

Film was nominated for an Oscar.

Plot: After a psychological crisis Jomar becomes a devoted loner. One day he starts a strange and dramatic journey to deep north, where his son, whom Jomar recently found out about, lives. The journey becomes a strange expedition with other lost souls, pushing Jomar towards final destination – reality.

Location of the event: Cinema centre „Skalvija“ (A. Gostauto St. 2/15)