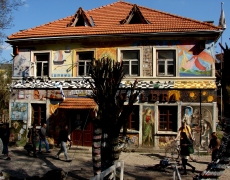 Uzupis is one of the oldest districts in Vilnius, mentioned in the historical sources as far back as XVI century. Once it was called the “salt road” to Polock. In old times it was a suburb, where the poor and mainly craftsmen lived. There were many mills and once it was even the brothel district. Today Uzupis is a unique Republic! A colourful and lively island separated from the city by the Vilnia River, Uzupis is a recognised district for artists and it has won the name of the most mysterious and romantic district in Vilnius. Uzupis is the Republic of Artists, which has its own constitution, national anthem, calendar and map. It also has its President, Prime Minister, Ambassadors from many countries around the world, military force (although it consists of only 12 people), a bishop, two churches, Bernardine cemetery (which is the oldest cemetery in Vilnius), seven bridges and a wonderful patron saint– the bronze Uzupis Angel, whose statue is situated in the main square.

Uzupis has its honorary citizens, such as His Holiness, the Dalai Lama; President of the Republic of Lithuania, Valdas Adamkus; artist Jonas Mekas and many others. Uzupis also has its own holidays – the Uzupis Independence Day, the Day of the Fish, the Day of Traps, the Day of White Tablecloths, etc. Moreover, there is their own traditional way of celebrating these holidays.

If you walk along the banks of the Vilnia River, you will be sure to come across artists working here. Passers-by are invited to have a try at the various kinds of art (like photography or painting) or to take part in an evening of summer cinema or exhibitions.

Everyone can find many interesting places and corners in Uzupis. One of them is the Uzupis Bridge, where lovers hang padlocks with their names engraved on them. A padlock is believed to tie and strengthen the hearts of two young people in love.